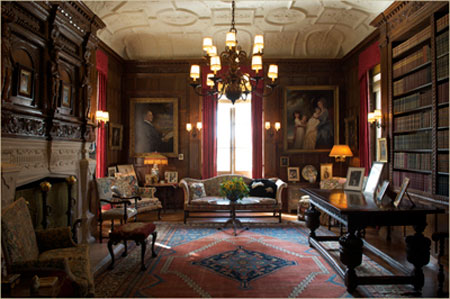 There are nearly 2,000 books in this room, including works by such French authors as Voltaire, Balzac, and Victor Hugo as well as an octavo edition of Audubon’s Viviparous Quadrupeds of North America.

The oak paneling is Jacobean, and the overmantel is a copy of a 17th-century English piece. There are paintings by Lucas Cranach the Younger, Pieter Breugel the Younger, and George Romney.

The triptych above the door is a 16th-century Flemish depiction of the Adoration of the Magi.

In the corner is a photograph of Ed Ball, Jessie duPont’s youngest brother. He was a trustee of The Nemours Foundation until his death in 1980.