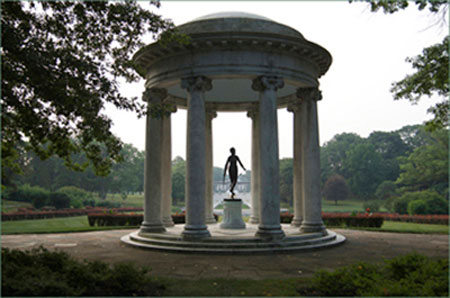 This classically styled temple is the setting for a statue of Diana the Huntress cast by Jean-Antoine Houdon (1741–1828). Houdon made friends with Benjamin Franklin when the latter was minister to France. Congress invited Houdon to come to the United States in 1785 to sculpt a statue of George Washington.

The cannons nearby are from the U.S.S. Constitution – “Old Ironsides,” the frigate that famously took part in the War of 1812 and other conflicts.