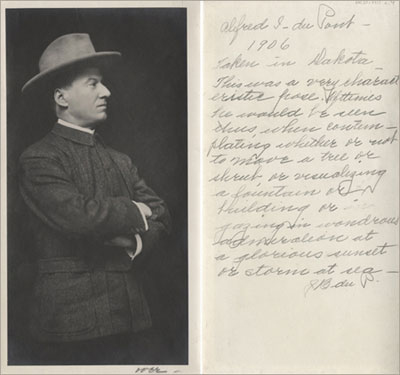 “Taken in Dakota – This was a very characteristic pose. Ofttimes he would be seen thus, when contemplating whether or not to move a tree or shrub, or visualizing a fountain or building or gazing in wondrous admiration at a glorious sunset or storm at sea”- Jessie Ball duPont

Alfred I. duPont was a quintessential Victorian who lived well into the 20th century. His remarkable achievements contributed to the modern world and helped change the way we live. He was a photographer, manufacturer, pugilist, musician, politician, banker, inventor, suffragist, newspaper owner, yachtsman, businessman and philanthropist. And through his will he achieved a lasting legacy by creating a foundation that has ensured the well-being and good health of millions of children.